When it comes to movies the Oscars are like the big annual soccer league and it sometimes is more interesting to keep track on who might get nominated.

This year is another year where I feel that the nominations are much more interesting than the actual race since it seems to be a fight between The Social Network (David Fincher) and The King’s Speech (Tom Hooper) and compared to last years very intriguing Hurt Locker vs Avatar this Oscar run I feel like I couldn’t care less – but since I have yet to see The King’s Speech my mood could dramatically shift in the not to distant future.
I guess my low motivation stirs from the fact that I’m rooting for Inception or Black Swan (and Exit through the Gift Shop for documentary) and neither of the two are favorites to win.

Both movies are made by directors I admire and neither Nolan nor Aronofsky have yet been nominated for best director or best picture.

Interestingly both delivered movies that went into my top five 2008 (The Wrestler, The Dark Knight) and neither of them managed to crack the big five at the Oscars 2008 (the movies that get nominated for both best director and best picture).

A combination of DGA, WGA and PGA is usually a lock for the best director nomination – one of the few exceptions was 2008 when Dark Knight despite having those three nominations did not manage to get best director/picture/screenplay but had to make way for The Reader (or to loosely quote the TV-series Extras “If you want to win an Oscar make a Nazi movie”) – a move very few had predicted and for some reason (cough Batman) the 5 best pictures expanded to 10 last year, with the Academy’s statement: “Well… yeah we know it should have been Batman and not The Reader” – quotation might be tainted by fanboy perspective.

Today the DGA was the last guild to announce their nominations and the five directors are:

I must admit I was a little surprised since I was fully expecting the Coen Brothers’s True Grit to be in the mix, well lets hope I don’t set my expectations to high for the Fighter (especially when it seems that Christian Bale is finally on a straight course for Best Supporting Actor).

Inception and the Oscar (Nominations):

So how are Inception’s Oscar chances?
I’ll check the categories first which I think Inception will hopefully get nominated but I highly doubt that it will win.

Acting department
While I love the performances in Inception none of them has the Oscar-flair, probably because Inception is a movie where so much of our attention is drawn to the world and the possibilities of dreams that despite having great roles and performances they tend to get overshadowed – so unless a miracle happens and Marion Cottilard gets a best supporting actress nomination there won’t be much to find here.
Plus the fact that Inception has no actors guild nominations is another big indication.

SMALL CORRECTION: Inception was nomninated by the SAG – for best stunt ensemble. Sadly stuntperformances is one of the overlooked/unrewarded arts come oscar season…

2. Screenplay
Another sure bet. The best way to think about a nomination is if you ask yourself “Is this factor alone enough to warrant watching the movie?”
For example I don’t like The White Ribbon, but the fantastic cinematography and the fact that the movie is shot in such a captivating way warrants watching the movie – and the Academy thought the same last year by nominating Christian Berger.
What is the thing people talk about when it comes to Inception?
The story. It is probably the movie with the most attention drawn to the screenplay. Just skim through the reviews, story and screenplay (and Nolan’s directing) are the most frequently cited factors that people love about Inception.

Now a win is pretty much an unincepted dream since The King’s Speech is a runner for Original Screenplay as well and usually the two main contending movies split the screenplays if they’re not nominated in the same category (2008: Milk and Slumdog Millionaire). But since for some inexplicable reason Precious won Screenplay last year, there might still be hope…

3. Best Director
Seems pretty safe now, but there is still the possibility of a The Reader move. Dark Knight looked pretty safe too, but in the end it wasn’t and with the Coen Brothers around to kick into the top five and one or to late surprises one should never be too safe.

Inception and the Oscar (possible wins)

Best Visual Effects
Inception is one of seven movies on the shortlist for best visual effects (along with Tron, Harry Potter, Scott Pilgrim, Hereafter, Iron Man 2, Alice in Wonderland) and is nominated for 4 awards by the Visual Effects Society.
The fact that the movie got praised for being a special effects movie that was not dumbed down makes Inception an ideal candidate to reward the craftsmanship and the way special effects are used to tell good stories.

Best Sound Editing/Best Sound Mixing
Two Oscars that get confused easily: sound mixing describes the process of cutting all the sounds/music and the stuff only a skilled ear can hear together. Sound Editing is fabricating sounds that are not recorded on set (best example would be the flashing lightsaber sound).
Richard King won 2008 for Sound Editing for The Dark Knight (the only Oscar Slumdog did not manage to grab) and now he’s back on Inception.
About sound mixing… I guess you can never have enough BRRRMMMM!!!

Update:
The American Society of Cinematographers selected their five movies as well: 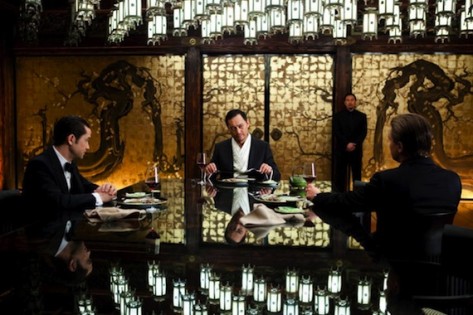 Need I say more? Another Oscar that can be easily taken from Inception since Art Direction is usually an Oscar that gets handed to period pieces (and King’s Speech being the main Oscar contender)
Inception’s beautiful art direction might be overlooked for more obvious-in-your-face art direction (just ask the guys who only get nominations for costume design if they make costumes for a victorian age movie).

Score
Hans Zimmer is back, Golden Globe nomination for Inception’s score and always coming up when talk is about the best score, the dreamlike quality of pieces like Old Souls as well as incorporating a slowed down version Je Ne Regrette Rien to explain the trademark BRRRRM is pretty cool, especially considering that he found a way for the soundtrack to both be suspenseful but also serve the characters in the story.