Contagion is the movie you do not want to see when you are traveling to a far away country. It chronicles a viral outbreak with a high risk of infection and delivers 106 minutes of uncomfortable realism.

I missed this movie in theaters but the airline to Hong Kong had Contagion in their selection. As mentioned before in the Movie Advent Calendar it is a very plausible and realistic movie. What made it even more uncomfortable was the fact that the opening scene features a tourist (Gwyneth Paltrow) who gets sick over the course of her trip to Hong Kong.

What follows is a sequence emphasizing the fact that we touch a lot of surfaces – be it in the subway, a restaurant, escalators… and so on.

All this is followed by elaborate monologues that we are touching our faces about 3000 times a day – the minute I arrived at Hong Kong airport I started watching my hands like a paranoid wreck.

There is no real protagonist in the movie, it is an ensemble piece featuring fantastic actors like Jude Law, Laurence Fishburne, Matt Damon, Marion Cotillard and Kate Winslet.
Also the lesser known actors are very good in their roles notably Jennifer Ehle as Dr. Hextall who plays a pivotal role in trying to analyze the virus.

Notable as well is Jude Law’s performance as a sleazy self righteous blogger is superb. And the phrase Blogging isn’t journalism, it’s graffiti with punctuation will be one of the most remembered lines of the movie. 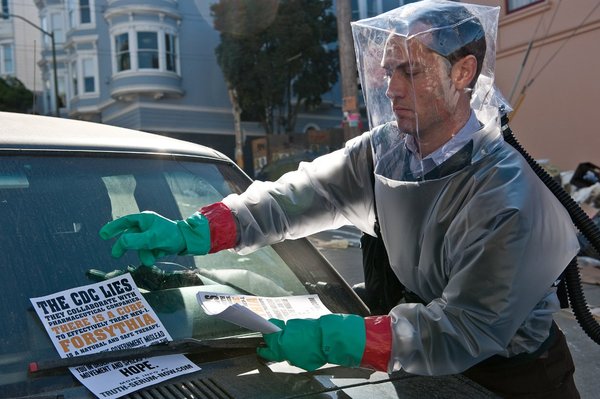 The fact that the movie is split into many small story segments adds to the realism and you never feel like you are watching a tailor-fit Hollywood movie. And also you won’t find corporation seeking out how to be super evil and build secret bases for zombie-experiments. The entire pharmaceutical areas are portrayed very objectively – as well are the reactions of the public and the media.

All these attributes make Contagion the first movie to get the Science Seal of Approval – a recognition for movies that are not dumbing down scientific ideas.

Because of its unsettling nature it is hard to recommend Contagion for a DVD-evening but it is definitely a movie that should be seen. The amount of work and care that has been put into the story is incredible. Director Steven Soderbergh has empathized that they tried to root the movie as much in realism as possible and he admitted that he got a tad paranoid himself while making the movie (taken from the BBC Radio 5-live Podcast).

Contagion is a movie that is not easy or comforting but should be rewarded for its ambition and the fact that it never backs away. There is no cookie-cutter ending, no sappy patriotism, no “now everything is happy now” – it leaves you uncertain and impressed.

But here is a word of advice – the movie creeps under your skin!
The moment I met my sister in the subway and she told me that she felt sick I prepared myself for my final days in Hong Kong…