Sherlock Holmes – A Game of Shadows

Sherlock Holmes: A Game of Shadows is eye candy first and foremost. Much like its predecessor it is style over substance but at least the style is interesting enough to distract you a little bit.

I especially enjoyed Robert Downey Jr. who definitely has fun with the role – maybe a bit to much but that doesn’t stop him from being entertaining and charismatic. With his slow motion Guy Richtie proved again that sequences are much more interesting with this tool than anything in 3D – although I have to keep an eye on the Hobbit as the 3D of this movie might make or break the current 3D fad. All those slow motion scenes blend in perfectly with the again enjoyable score by Hans Zimmer.

Where the movie breaks apart is its plot. It isn’t clever or intriguing enough neither does it work on any level. The first 60 minutes especially suffer from the fact that there is nothing of a concrete story to be found. 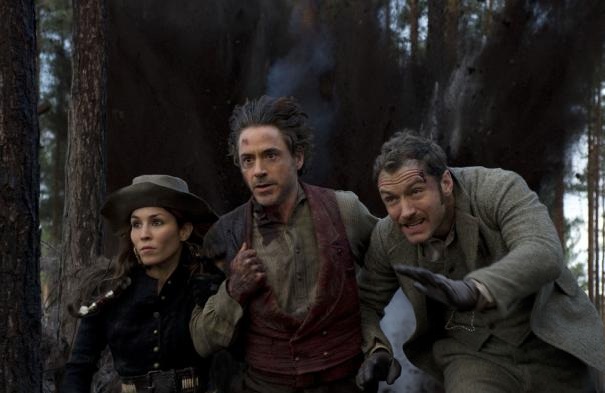 Which brings me to a big problem of the movie: at 129 minutes the movie is too long for such a weak script.

To give you an example of the structural problems one needs only to look at the first scene between Holmes and Moriarty. It is only there as a setup that the newlywed Dr. Watson is in mortal danger. Which in turn is an excuse for a 20 minute action scene on a train – and an excuse to show Downey in women’s clothes for laughs.

This is basically the feel of the entire movie – a conglomeration of setups that are firstly there to set up the action scenes and only secondly to have an impact on the plot.

It surprised me how close Guy Ritchie stayed to the ending of the original short story The Final Problem by Arthur Conan Doyle – yet in the last minutes he drops the ball in favor of a possible third part instead of having an impact similar to the original story.

Don’t get me wrong: if you want to watch a stylish action movie and are not too keen on plot you might get some thrills out of this installment but it isn’t an adaption worthy of the title Sherlock Holmes. Also given the fact that there is already a brilliant television series Sherlock made by BBC shows that the source material has more to offer than slow motion action.