The big Winners: Hugo and The Artist

I am still not a fan of The Artist but I don’t have any of those angry outbreaks I had last year with The King’s Speech and seeing as none of the 9 Oscar movies has managed to crack my personal top 3 (compared to last year where Inception and Black Swan were at 2 and 3) there was not outrage that the “truly deserving movie” lost.
The outrage never happened because my top movies this year are no Oscar candidates (more on that very soon). Hugo had some nice wins but it also scored some undeserving wins (more on that at the end).
While all five Best Costume movies have been period pieces I like the fact that The Artist got the golden statue and not one of those victorian costume dramas which has nothing except nice looking costumes (see any other year for Best Costume Oscar for proof).

Biggest surprises
I did not see The Girl with the Dragon Tattoo getting the editing Oscar. Not one bit. I used the logic that many predicitons use: that the editing Oscar is the one that statistically goes the most often with the best picture Oscar. And while I think Dragon Tattoo is incredibly average at best it is nice to have a decision that is contrary to the “well let’s just give it to the best picture movie”-attitude that seemed to have been the deciding point a lot of times.

Meryl Streep winning for best actress was something that took me by surprise as well. But on the other hand one should have known that Harvey Weinstein would bring his A-game and get Streep the Oscar. I think this is a really sad win since The Iron Lady is the very definition of oscar-bait. A historical drama with a well known actress and a lot of DRAMATIC SCENES.
The argument “well Streep has been nominated so often in the past it was time that she got the Oscar again” is not really a strong one considering that Meryl Streep just needs to look funny into the camera to get a nomination (Julie and Julia). Don’t get me wrong, she is probably one of the finest working actresses out there right now but I think Streep has evolved into a behemoth when it comes to Oscars where she gets nominated for stuff she does good but any other actress would not even be considered for a nomination.
When it comes to instant critical praise Streep has become a giant brand. And frankly: does she really need it? Shouldn’t awards like this also help rising talents and so on?
Viola Davis has been incredibly impressive already when she just appeared for a few minutes in Doubt (2008) and while I have not seen The Help yet I can’t imagine her bringing less to the table than Streep did.
But if quality were a deciding factor Tilda Swinton would have won the Oscar for We need to talk about Kevin – before you start looking her up if she has been nominated, she hasn’t. The absence of Swinton was even more infuriating by the fact that Rhooney Mara was nominated for Dragon Tattoo when her performance was a pale imiatation of Noomi Rapace’s work (Lisbeth from the original Dragon Tattoo).

The win for original screenplay (Midnight in Paris) was also something I was not quite sure but I thought the Artist would get the sympathies. But it seems as if the silent film setting kept The Artist from winning over movies with spoken dialog – or the Oscar voters share my view about the unremarkable story.

Cinematography to Hugo was something I thought of as a possible scenario but my gut (and the cinematographer awards) pointed towards The Tree of Life. I can rant as long as I want about this film at the end of the day the fact that is the most astonishingly shot movie of the year is something that nobody can deny. I think this decision was again not a decision made because of quality but because Hugo was the heavyweight and just got technical awards, which was also the case when the biggest FUCK YOU happened: 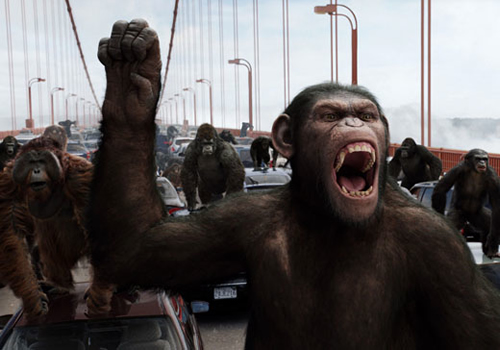 Yes, I know: “Did you really think the Oscars would give Apes the award?”
To be honest: “Yes I did”
Rise of the Planet of the Apes is not only a film with great special effects but a film that uses the effects to tell a moving story. It is a remarkable mix of entertainment and social commentary and despite being a blockbuster it is not a dumbed down story.
Personally I think Caesar communicates more about his character and feelings without talking than the entire cast of The Artist. Still Apes was not an Oscar movie. When it was nominated for only one Oscar (Transformers has three in three categories where Apes would have also been a good competitor).

One can say how predictable and logical it was that Apes got overlooked – it doesn’t change the fact that this was the most idiotic Oscar decision in recent years – maybe even more idiotic than denying Christopher Nolan his Directing nomination two times in a row.

Still Apes will go down in history books. It is already the go to movie when you want to show that effects are not just there to look great it is the prime example of how beautiful this technology can be and it would have been nice if it had gotten the recognition it deserved. Anywho, after my top ten list (I have yet to rewatch Drive as I was told by multiple friends that the movie is incredible the second time around) there will be a big special for Caesar and his ape-friends.