Some thoughts about the Avengers Trailer

After a disappointing poster Marvel revealed the final trailer for the upcoming team-up movie The Avengers.

Some thoughts after the jump:

Starting with remarkably unremarkable explosions and asian tourist sterotypes we get the impression of another exploding blockbuster. Followed by even more shots of military guys shooting probably to capture the attention of the average Joe before the apeshit starts.

Then things go crazy and we get the shots of every character with a particular empathis on Iron Man/Robert Downey Jr. who undeniably is the selling factor.

Now this sequence bugs me a bit because it underlines the showy nature of this trailer. It banks on what we have seen before and just gives us the thing we liked but flashier. Iron Man’s suit up scene was one of the coolest things in the movie and the machine itself was impressive. While it sure was comic-booky it still felt like an actual machine. This unsuiting-machine is just there to scream “look how awesome” or “look how cool Stark is, he doesn’t even have to pause to get out of his suit”. It sure as hell looks impressive but at the same time it does not hold the narrative charm of the Iron Man 1 machine.

Now after individual buildup this shot (and the money shot at the end) make it pretty clear what this is about: heroes from other movies in the same frame… let’s see if there is anything behind this as well or if it is just a gag because we haven’t had a crossover like this before. At least the above picture makes the heroes look ok compared to…

It is pretty bad if the two characters who have yet to justify their existence amongst gods and machines look less ridiculous than Captain America who seems to be attending Comic Con. Thankfully we get a glimmer of hope within this preview:

Please Tom! You made a movie about gods fighting on a rainbow bridge work, a little Alien invasion has to be a piece of cake for you!
Deliver us from shots that are staged to talk to the audience instead of looking like natural action sequences…

Those type of “staged epic shots” where already present in the first trailer where heroes strike their pose infront of explosion giving the scene a very artificial feeling: 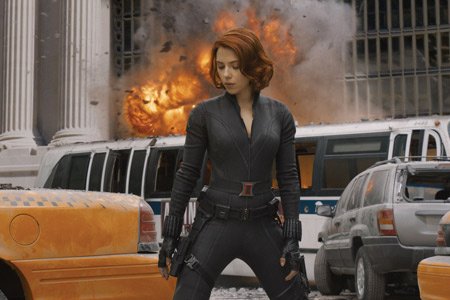 It culminates into the ultimate “this is what it is about” moneyshot of every hero doing something cool while we are left to wonder what a gun can do that a Hulk can’t.

At the end Iron Man returns to bring back Michael Bay’s toy:

Verdict: Well if anything this trailer has again dampened my expectations. I am still curious about the final product. After all this movie has had a 10 hours trailer over the last 4 years. The question is if it will pay off?
Right now I am more interested with the concept and the marketing behind this movie than the actual product. Stay tuned for more Avengers Analysis as I will revisit one of the first articles of this site: Avengers: The Good, the Bad and the Ugly before Avengers comes out and afterwards.