This is the second article in the coverage of the movies related to 2012’s The Avengers. To get to the overview click here.
For my original Captain America click here.

We kick off the first movie about a Nazi-punching superhero during World War II. Sadly Captain America lacks the balls to be a sort of war movie. Joe Johnston who has had some experience with superheroes when making The Rocketeer (1991) created a throwback movie to the older superhero-movies.

The hero
I find it hard to write about Captain America as a character just from this movie as he doesn’t do a whole lot or has interesting ideas. Probably because he is too perfect. Similarly to Superman he is just beyond virtuous. He is a good guy, something people should aspire too but there is no real conflict for him to become the good guy – he is like this from the very start. 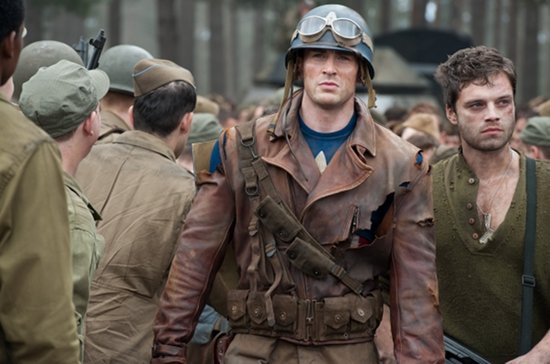 A cynical viewer might even go as far as saying that he is not good because of a philosophical belief but because he is a gullible boy who takes war propaganda as a fact.

There could have been a way to make this nostalgic trip a bit more interesting but this would have required some serious restructuring – I’ll get to that at the end of the article. Let’s first examine the things Cap has to overcome:

The pretty war
The problem is that setting a superhero inside a war, especially the second World War should have some sort of impact. But the enemies are just another faceless horde Cap could encounter in any decade. Maybe it was intentional, maybe it is just to show that America will punch anyone no matter the decade.

It is a very unfair comparison but Inglourious Baserds showed that one can impose a different movie genre onto the World War II setting, be fresh and enjoyable yet convey a sense of gravitas. But with this movie all the edges have been taken away (a phrase I will probably use many times in these reviews so best do a drinking game for every time you read it).

The Nazis are not Nazis, they are Hydra soldiers. So why do you use the Nazis as a villain when you turn them into something so generic it looks like a villain from G.I. Joe? The Nazis are perfect evil-doers, you don’t need to justify why you are fighting them – something Indiana Jones proved twice.

The setting of World War II should give us the idea of this Marvel universe and use the authenticity of a real life event to subtly weave in fictive events – something that X-Men: First Class kind of succeeded with. Instead you destroy the authenticity by separating the villains and heroes so much from the actual events that the historical backdrop is just windowdressing.

Plus the war is pretty clean as the villains have guns that conveniently neutralize a person into particles. This a very common thing in mainstream movies. Violence can be sneaked into a movie if you don’t show blood. The battle scenes with tanks and soldiers in this movie are “harmless violence” which is ok for 13+.

In the fantastic documentary This Film Has Not Been Rated director Darren Aronofsky (Black Swan) stated that bloodless violence should only be shown in adult movies because only an adult can understand that if you shoot a gun the person is really dead – he also concluded that therefore 18+ movies should be the new 13+ because you need to show children that killing someone is nothing that is clean.

But the idea of bloodless violence is something that will return once we get to Iron Man 2.

The villain
Much like Captain America the Red Skull is very bland and generic. His motivation is cliché and uninspired and I don’t care if the script kept it simple because it is a throwback – a throwback to a stupid idea doesn’t make a stupid idea better it just shines a spotlight on how much mainstream villains have evolved from caricatures to characters. 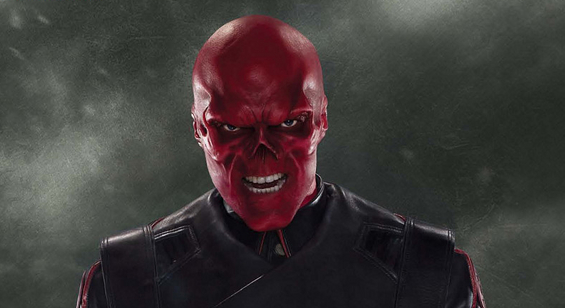 And as an Austrian I find Hugo Weaving’s “German” accent very distracting and laughable. Once again I have to reference Inglourious Basterds because it showed that Germans don’t talk English with a bad accent when they are in Germany. What’s so wrong in adding subtitles to the scenes in the German base – do we really need to hear more about huge Weaving’s “tight SCHedule”?

The bigger story
While this movie has a lot of faults (the main being that it is way too long for the little story it conveys) the continuity and easter eggs are actually quite well placed. They never stick out as something that doesn’t belong into the story.

The Stark Expo is just an Expo if you haven’t seen Iron Man 2 and the Nordic gods are just some crazy legends which actually fit into the Nazi-background. In the case of the gods I felt that Thor really added to Captain America’s storyline. You understand the energy source even if you haven’t watched Thor but if you have the Odin background has a whole new meaning and is a new layer for the story – which is pretty much the best way the MCU can work. 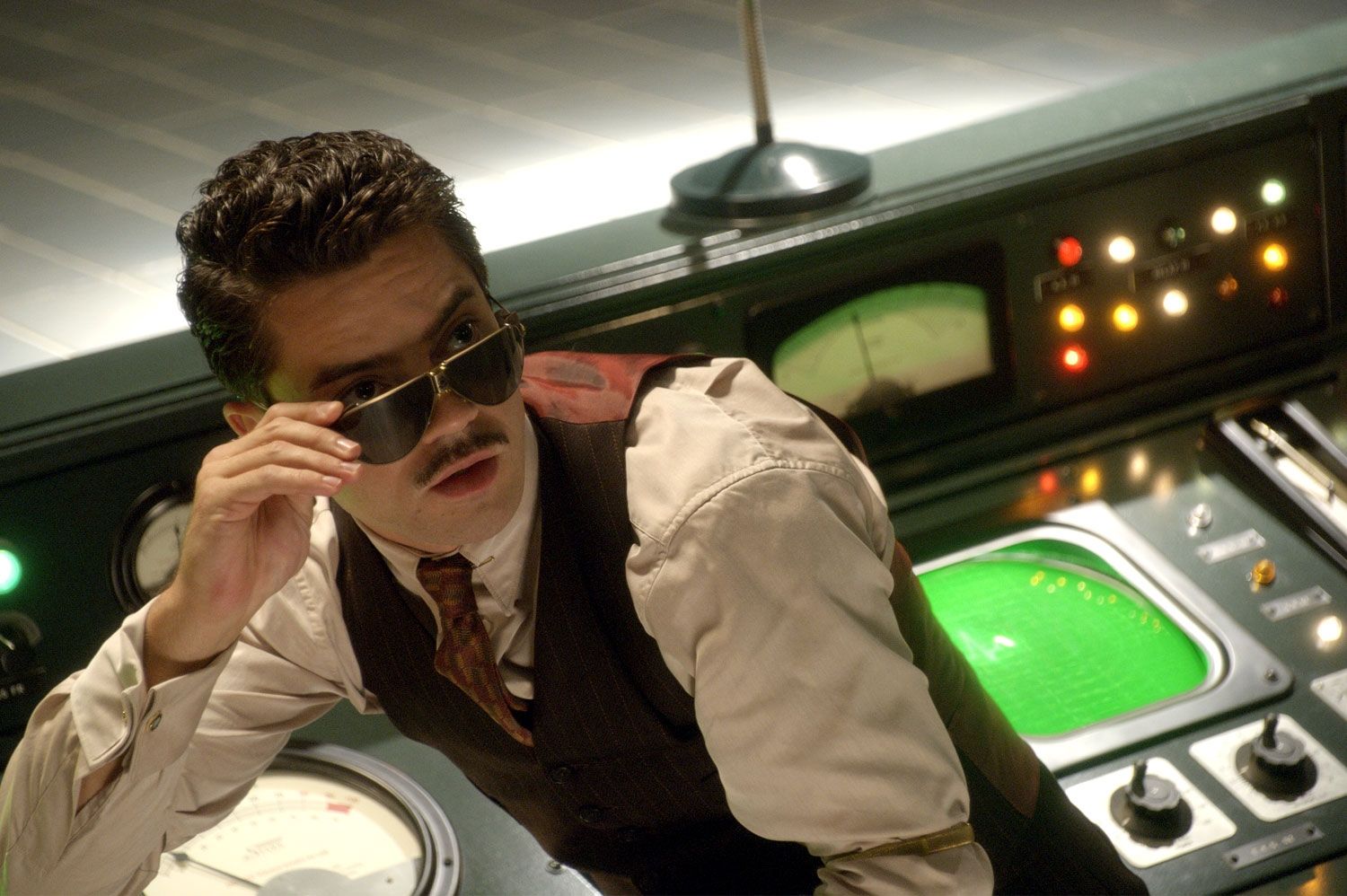 Also the character of Howard Stark is one of the strongest suits of this movie. He is not just an easter egg but an integral character for the story. He is the Q/Morgan Freeman of Captain America and provides some charisma reminiscent of his son who we will visit tomorrow. Once again the continuity aspect adds to a character but does not distract if you have not seen it. Unlike…

The ending
Now watching this movie as the first in this review series further showed how much the ending does not work. You spend the entire movie during World War II and suddenly a black pirate appears in New York and tells Cap that he has been asleep. It doesn’t help that Sam Jackson’s cameos never seem to feature him actually acting and seem more like line-reading.

Especially if you haven’t seen the other movies this ending is complete nonsensical and a cop-out. It is not an ending but a cheap cliffhanger introducing a last minute storyline to keep the story going. Also because we see the ship found at the beginning it isn’t much of a twist either. If they had just omitted that opening started in World War II and then have Cap waking up might have been a shock… might…

This is one of the things I really don’t like about this crossover: instead of focusing on each hero, giving him the best possible story for his debut they withhold stories for the future and passing the time until then. Probably they wanted to save the present day stories for The Avengers which meant that they more or less passed the time with Captain America until he arrived in The Avengers.

I-ma-gi-naaaaa-tion
Let’s stray a bit off and go into the imaginary land of movies that never happened. 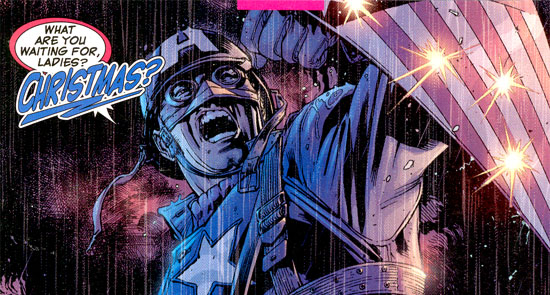 In the Ultimates comics one of the most interesting stories is the fact that Captain America has been frozen and is now in a world he doesn’t understand. More than that he finds out that his great love Agent Carter has married and is now an old woman.
This is a very intriguing conflict which shows the hero that life has moved on ignoring him. It is an emotional blow to be told that the person you thought would be your “true love” actually forgot you. It is a crushing experience and it takes a hero to overcome those facts and still be optimistic – which is something Captain America can do!

Imagine the movie telling us very early that Captain America has been found. He wakes up present day and finds out that the world has moved on. Via flashbacks we follow Steve Rogers on his way to Captain America in a gloriously exaggerated World War II (as seen in the movie). The style of the flashbacks would serve as a contrast that those times are no longer. Captain America would find a nation that might no longer be the glorious America he had thought it was – only to realize that it had always been a dysfunctional world, he just never stopped to look at it.
With the flashbacks culminating into the final fight present Captain America would come to terms accepting an imperfect world but refinding the strength to be a hero and fight for the values. The movie would be a coming of age story of the old superhero that is a relict of the past being reborn in the present day and refusing to believe that virtues are illusions… of course we didn’t get that.

Verdict
Instead of this we got a straightforward movie with precious little conflicts. Captain America never really does anything particularly heroic aside from punching Nazis who are not Nazis. The war finishes without the hero and we are left wondering if the stories about Captain America struggling the find the “American dream” again might be incorporated into the Avengers…

Until Joss Whedon said this in an interview (source: Collider):

One of the best scenes that I wrote was the beautiful and poignant scene between Steve and Peggy [Carter] that takes place in the present. And I was the one who was like, Guys, we need to lose this. It was killing the rhythm of the thing. And we did have a lot of Cap, because he really was the in for me. I really do feel a sense of loss about what’s happening in our culture, loss of the idea of community, loss of health care and welfare and all sorts of things. I was spending a lot of time having him say it, and then I cut that.

So yes… here we have it. The story of Captain America was cut back because they wanted to save it for later – only to find out that it didn’t fit into the other movie. So in my eyes Captain America is the big victim of this MCU. It has to deal with a less interesting story promising us we will see the great character moments later on only to cut those very moments out of the final products…

Personally I find the overall film very dull and generic and for all the little plus sides (Howard Stark for example) there are too many uninspired stories and ideas just passing the time from little Steve to frozen Captain America.

But while this might have been a not so heroic start tomorrow the skies will clear up as we head to the legacy of Howard Stark in Iron Man.