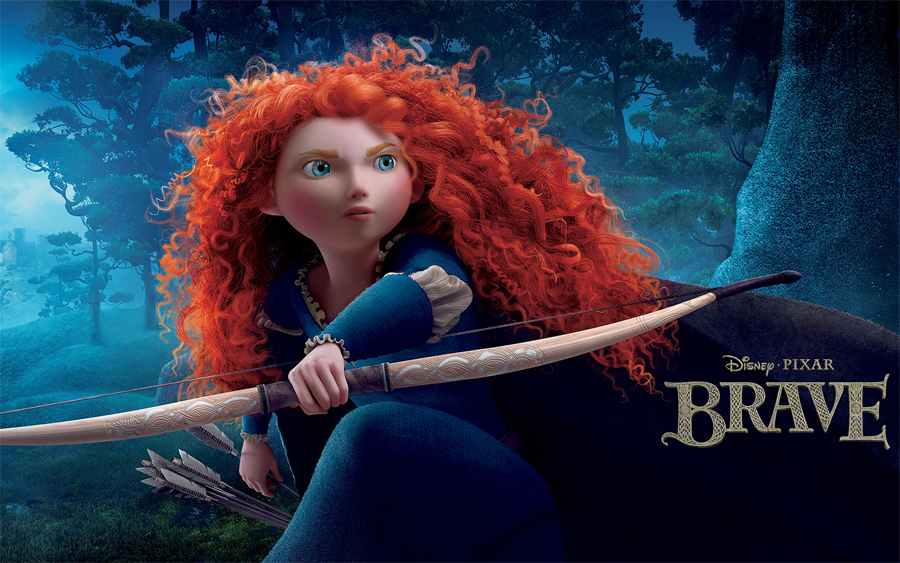 After Ice Age 4 predictably failed as a family film and after seeing the uninspired trailer for Madagascar (insert number) Brave made an undeniably positive impression on me.

Set in old Scotland the story follows princess Merida who is promised for a political marriage. Running away from this tradition Merida finds a witch – cleverly disguised as a wood carver – she gets a spell to change her destiny. Naturally when dealing with wood carving witches the spell is not quite what she had hoped for and accidentally turns Merida’s mother into a bear.

Now mother and daughter have to find a way to undo the spell.

Brave is a joy – visually and storywise. And even if people complain that the movie doesn’t reach the creative heights of previous Pixar installments Brave’s heart is still at the right place. Merida is a teenager struggling with everything her parents bestow upon her. Yet contrary to the typical contrived parents/children conflict this movie manages to make both sides relatable. Parents aren’t forcing things upon their children because they enjoy being unpopular.

Like all Pixar stories Brave was written by somebody with an understanding of the characters that are featured in this movie.

While it abides by some conventions that are not as creative as we are used to Brave nonetheless covers some new grounds especially in the princess genre. Furthermore this movie is entertaining for adults without the annoying pop culture references that plague current children-movies – plus when they twist known stereotypes of witches I couldn’t stop laughing.

From an animation standpoint Pixar shows again how much their characters can communicate without words and how strong animated storytelling can be.