Continuing the tradition of The Dark Knight and Skyfall the villain of Star Trek Into Darkness has a scene where the villain gets locked up (and has a plan?). Furthermore the name of the much rumored character played by Benedict Cumberbatch (Sherlock) has been revealed, spoilers (?) about to follow: 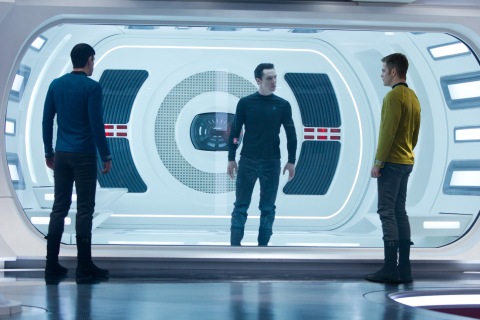 and nobody really seems to have a clue who he is.

Furthermore Alice Eve’s character name has been revealed to be Carol Marcus – to those not familiar, Carol Marcus most prominently featured in Star Trek II: The Wrath of Khan as a former love interest of Kirk and mother to Kirk’s son. Many people are now speculating that Cumberbatch might actually be the infamous Khan but I think the name is chosen so that we know that Eve’s character will be important for Kirk (and killed off for emotional effect?).

I still doubt it will be Khan. I assume that the writers want to do a Khan-esque story but be freed from Star Trek canon. Therefore John Harrison is in my opinion just a placeholder for a character who shares traist with Khan.