Reviewing a Tarantino movie is always tricky as there are very few directors where it really depends on what you want and expect when going into his movies – depending on this either you love the things or you will roll your eyes at them.

In 2009 I heard average buzz at Cannes from Inglourious Basterds and not being a real fan of Tarantino’s works post Pulp Fiction I went in wanting to see the pretentious director fail miserably… I went out of the cinema begrudgingly admitting that Inglourious Basterds was a pretty solid film. And the more time passed the more I fell in love with it until it eventually ended on my year’s best list and still is.

With Django Unchained I went in wanting to really like it because Basterds had just swept me around and reduced all the problems I had with Death Proof and Kill Bill.

The Wild West
Tarantino is not a director where you see studio interference so his works (good or bad) are all very personal. The same goes for Django Unchained starring Jamie Foxx as the title-giving protagonist who is found by Dr. Schultz (Christoph Waltz) and subsequently freed.

Schultz’s intention: Django shall help him find the Brittle brothers a group of wanted men. Schultz is a bounty hunter and very soon Django finds a new profession and joins Schultz to hunt for people evading the law. Eventually though he needs to find his wife Brunhilde/Broomhilda (Kerry Washington) who is in the clutches of Calvin Candie (Leonardo DiCaprio).

The story is a pretty straightforward one with not many twists and suffers from something inherent in most of Tarantino’s works: his characters are flat and boil down to basic descriptions:

And most of the actors deliver solid performances and depending on your preferences you will either be joyously embracing Christoph Waltz’s return or think of him as delivering a Hans Landa impersonation where the quirks don’t make him scary but more of a caricature than a character.

On the plus side the actor who really stunned me was Samuel L. Jackson playing DiCaprio’s servant Stephen. He is just scary and twisted, repulsive and pathetic. And it was a stroke of genius to cast an actor who usually lands “badass comic book roles”. The shock of Stephen’s physical appearance is intensified by Jackson portraying a character unlike any other he has portrayed in recent blockbusters. 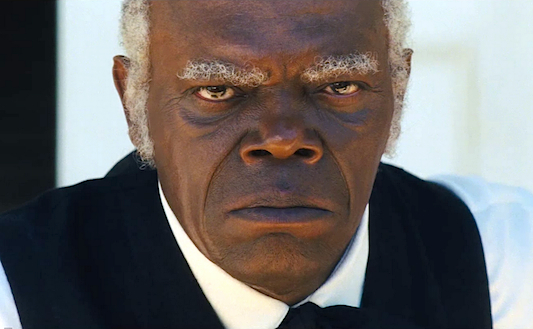 The life of caricatures

I often wondered how incredible a Tarantino movie would be if its characters had genuine story arcs and went through a change – There are a few characters like this in his films but they are vastly outnumbered by the rest.  Most of the times Tarantino elevates his characters because he is one of the best writers around and it speaks for his skill in writing that most people don’t have a problem with his characters despite them being so one-dimensional.

The difference to Inglourious Basterds for example is that in Django Unchained just boils down to 4-5 people whereas Basterds was split into various segments with different protagonists. Even though most of the characters in Basterds were one-note characters they were only long enough on screen to entertain us, then got killed and then the next characters arrived constantly shifting the focus, the tension and the surprise. Therefore the dynamic of Basterds was never clear and was kept entertaining.

Also the World-War II “re-imagining” was much more about suspense. The opening featuring Christoph Waltz and the French dairy farmer was packed with suspense because the audience was unsure who had the upper hand – same goes for the Strudel, the card game and the entire finale.

The only suspense in Django Unchained is “will DiCaprio find out what Django is planning” and it gets dragged on without any real moments of tension. The moment the tension arrives it directly goes into mental –mode and is pretty much the contrary of the skillfully written tavern-scene  in Basterds.

The jews are now black!
My frequent comparison to Inglourious Basterds seems very unfair doesn’t it?
Shouldn’t two movies so different be judged on their own merit?

The problem is that the movies are not that different. Both are exploitation movies portraying an ethnic group as super-vengeful which is commonly depicted as the victim in stories.

But Django Unchained is a Western! That’s different!

This is something that really gets into my personal movie preferences as it is very similar to “Sci-Fi is the thing with spaceships”. Both Django and Basterds are Westerns – a genre I am very fond of. For me Inglourious Basterds was one of the best modern Westerns in recent years having all the necessary things:

Long buildups, suspense that gets resolved in a very very short time compared to the buildup, amoral villains and heroes and no true good/bad guys, just a bunch of people whose “horribleness” varied.

Django is set in a Western backdrop but is not nearly as engaging. It is more a showcase of “things that happen in some Westerns most people probably haven’t seen”.

And contrary to Basterds where everything revolved around movies and therefore allowed a natural blend of genres in Django the movie stops for an awkward reference and you are left thinking “I have no idea why this was in a movie…. Probably a reference to some old movie”.

So this will probably be the deciding factor – if you never had a problem with Tarantino drifting away into endless anecdotes you might not mind it at all and on the contrary find it very informative. It is also to be said that probably all his references and Easter-Eggs are placed in the film for a reason and I am damn sure that every single frame he has shot is in some way homage or a comment on something. So you can’t really fault Tarantino on the artistic level.

It just boils down to the fact that even if you cast Jonah Hill in a scene that deliberately portrays the villainous white-racists as incompetent it feels more like a cheap comedy than something organic to the story.

Personally I couldn’t help but feel as if Django Unchained was a very tame reproduction of Inglourious Basterds. It ticks the very same boxed but is dressed in a new shiny coat but essentially has everything Basterds had but drawn out and with precious little of the refreshing and preposterous premise of Inglourious Basterds… then again how can you top killing Hitler in a movie theater by vengeful Jewish assassins?