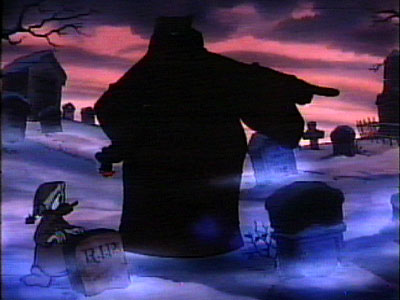 Disney movies can be extremely terrifying. The Beauty and the Beast is in my eyes still the second scariest movie of all time and Mickey’s Christmas Carol is no exception of the “let’s traumatize some children”-rule.

Retelling the story by Charles Dickens Scrooge McDuck is confronted with the three ghosts of Christmas past, present and future. The future one being the last and scariest. Ebeneezer Scrooge/Scrooge McDuck is lead to a cemetery where he not only has to see that tiny Tim has died because his family was so poor. He also witnesses two gravediggers talking ill about a person whose grave they are working on.

When Ebeneezer inquires the name of the man who seems to be despised by everyone he finds out that it is his own grave and the (scary) laughing ghost of Christmas future throws Ebeneezer into his hellish grave.

Stephen King once wrote that in child stories children will not remember the happy end, but the horrible stuff that has happened before them. The images, the suffering before the resolution are so much more gripping and will stay in the minds of people long after the happy sappy ending has been forgotten.

Nothing could be more to the point when I think of this scene which still makes me feel uncomfortable… Ebeneezer might wake up and change and have a merry merry Christmas, but the fear before this waking up is stronger than anything else.