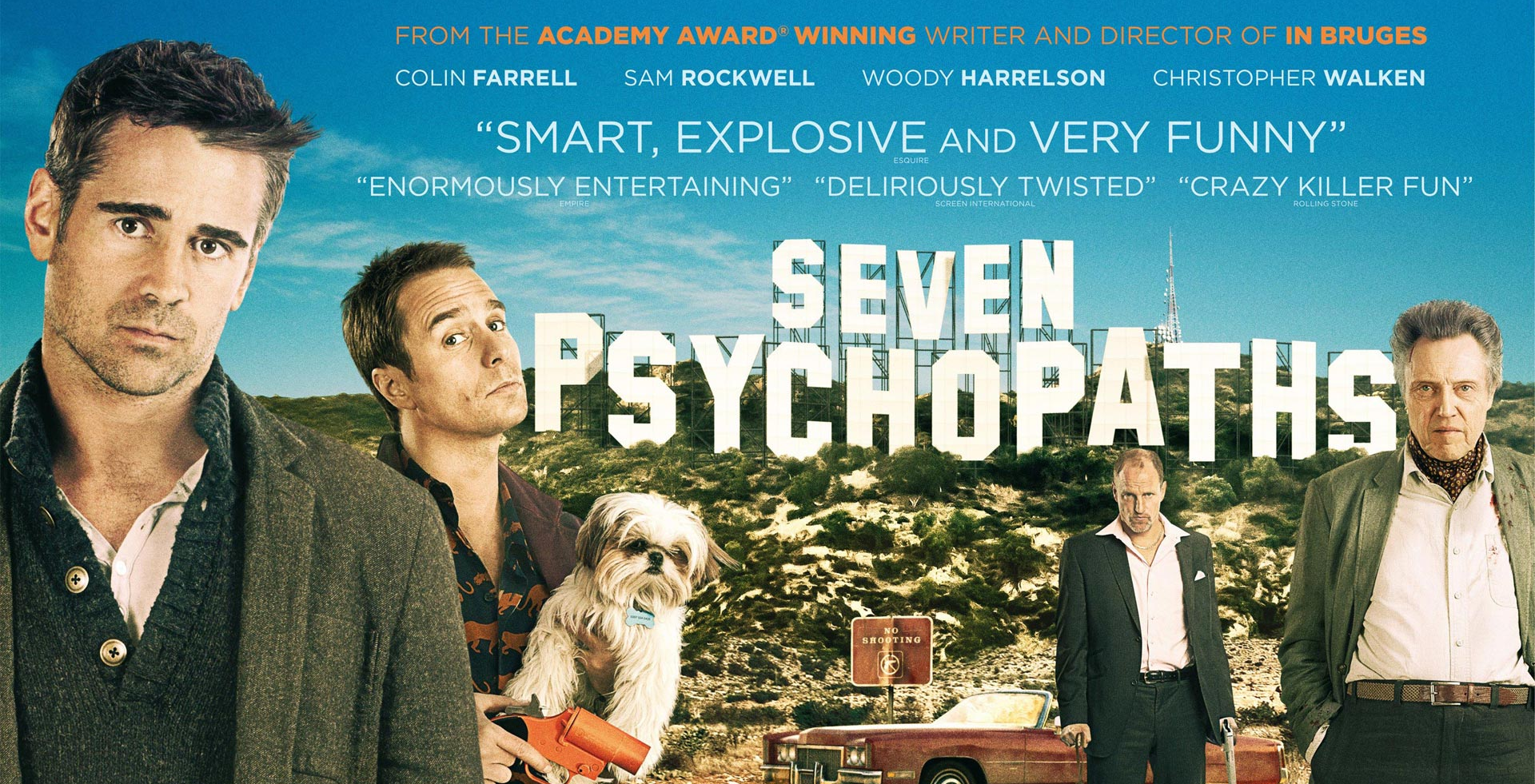 After delivering one of the funniest comedies in years with In Bruges (2008) Martin McDonagh returns with another black comedy featuring again Colin Farell, Christopher Walken, Sam Rockwell, Woody Harrelson and many more.

If the cast list and the director is not enough to sell you the premise is a very unique one: focusing on a crime that has not received that much coverage we follow Hans (Walken) and Bill (Rockwell) who are working in the dog-kidnapping business.

Meaning they steal a dog and return it to the owner who is paying them a handsome reward for finding the lost dog. Into this story comes Colin Farell a screenwriter wrestling with his newest story. Things go haywire when Hans steals a dog belonging to the mafia-boss Charlie (Harrelson). And if you steal Woody Harrelson’s dog you are in for a messy trip.

Comparisons to In Bruges are unavoidable but only dominate in the first half when you are not yet sure what this movie is about. Thankfully Seven Psychopaths has probably the most misleading trailer in recent years selling the comedy as a sort of Ocean’s Eleven with crazy people. The trailer even names and characterizes Seven Psychopaths.

Still it turns out that some of those people are not really the psychopaths and comparatively sane to the seven – some of the alleged psychos in the trailer sometimes end up with 2-3 lines and are gone within 15 minutes of the movie.

Then again I was really happy for this misleading trailer. It sold you on the black comedy aspect yet I never quite knew what I was in for or where the story was heading. As soon as the movie got interrupted by a sequence featuring a Vietnamese in a priest uniform speaking some vengeful monologue I delightfully went along – without having any clue what this was all about. And that was the moment when I stopped comparing the movie with In Bruges.

Where In Bruges was a very intimate and sometimes very harsh comedy this feels incredibly over the top – in a good way. The characters still have their arcs but the entire story is embedded in a very strange tale of revenge and violence. It also features an amazing quasi-showdown in the middle of the movie – I am choosing the word quasi-showdown as I am not really sure how to best describe it without spoiling the surprise. But I dare say that any wannabe „trash-director“ will envy McDonagh for coming up with probably the most ridiculous and watchable showdown for a crime-comedy (including simultaneous movie analysis). While there weren’t many people in the cinema when I watched it those who were there couldn’t stop laughing at the sequence.

Aside from that particular scene the movie is layered with entertaining dialogue and has enough food for thoughts for later conversations – still you can enjoy this movie as a piece of entertainment without wasting a single thought on the characters.

I can’t wait for the next comedy by Martin McDonagh!