Knowing this premise I had the following image of what Attack the Block would be: An innocent movie, like the ones you see on Sunday afternoon programs. Something to switch off your brain and watch the “kids beat up the evil aliens”.

What I got was a true science fiction movie that used the sci-fi premise for a statement about social frictions.

Our group of (anti)heroes is led by Moses (John Boyega) and instead of being a group of happy go lucky children they are presented in quite a different way: Moses and his gang rob a nurse (Jodie Whittaker) on her way home, simply because she is in “their block”. Their robbery is interrupted by a meteor that crashes down. And with that meteor comes a lot of trouble for our protagonists. 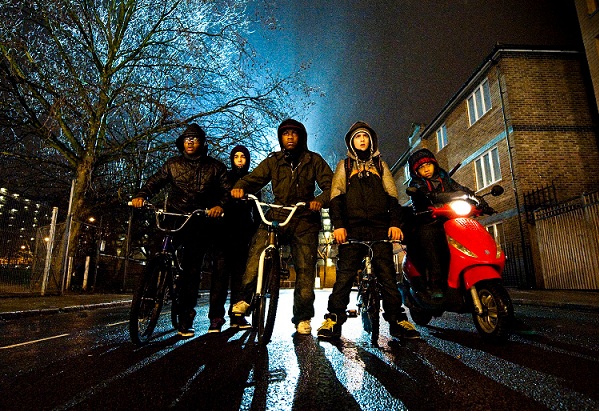 People tend to forget that Science Fiction is not defined by the amount of spaceships in your movie. Sci-Fi can happen everyday, it uses a what-if scenario, an external force in this movie’s case and utilizes this plot device to reflect on the essence of human nature.

The aliens are presented in a very rational way, there are parallels drawn to biological phenomenas – just so that the aliens don’t appear out of nowhere. Once again the science fiction is used to make an over the top situation (alien invasion) as semi-plausible as possible in order to make us reflect about ourselves.

Because of the aliens the children have to realize who they are. The sci-fi plotdevice allows it to step outside our safety zone and reevalue our view of characters. The fact that Moses and his group are no shining heroes gives the movie even greater weight – they feel like actual characters and the alien invasion is just the tip of the problems they are facing. Their struggles and quarrels feel real and relatable.

But aside from all the fleshed out characters and social commentary Attack the Block never drags. It gives you room to think, shines a spotlight on big problems that our society often turns a blind spot to, yet it never preaches – it entertains while also challenging us to rethink our prejudices.

Attack the Block is more than worthy of a big screen viewing and makes for a satisfying movie to take a group of friends to and have fun.