Real Steel is about a world where boxing is no longer a sport for humans. Instead we now have two robots hitting each other in the ring. Amidst all this CGI we find Hugh Jackman – a disillusioned ex-boxer who now remote controls robots for fairs. He also likes to gamble and tends to make a load of debts with all the wrong people.

Enter his son who he now has to spend two months even though he doesn’t want to. When the son finds a robot on a junkyard he is convinced that this robot can be programmed to win a lot of money.

Will the robot enter the World Robot Boxing Championship?
Will the cold relationship between father and son change?
Does the robot represent a chance of redemption for something in Jackman’s past?

Well I don’t want to spoil anything…

The entire story of Real Steel is incredibly predictable. It is structured like a typical sports movie with a protagonist down on his luck, not believing in himself and ends with… but that would be a spoiler again.
The point is: you have seen this movie a dozen times before.

So why bother?
There are two stories in Real Steel. One is about a father and his son (Dakota Goyo) the other is the hamfisted love story with Evangeline Lilly who has already demonstrated in six seasons of Lost that she has the power to suck everything interesting out of a scene.

But while Real Steel is no definitive “must see” I must admit that I surprisingly enjoyed most of the movie. Every time it was about Jackman and Goyo and their relationship the movie keeps your interest.

The robot boxing is also a very interesting setting and allows for some creative ideas:

What do people want to see?
How important is the show before the fight?
How do illegal robot boxing events look like?

Whoever was responsible for those robots and the storylines has probably watched more wrestling videos than a sane person could bear. The moderators, the way the fight is orchestrated, the banners, the advertisement – all this makes the robot boxing feel as if it were a real sport and could really exist in the near future. Although the movie’s 2020 setting might be a tad early.

And seeing as how in Korea Starcraft games are equally hyped as soccer games in Europe I don’t think the concept is that big of a stretch.

The downside
Where the movie just crashes is the schmaltzy part which includes Evangeline Lilly being useless as always, a story about the man who trained Hugh Jackman and a hilariously cheesy slow motion stare very close to the end (slow-mo tears included of course).
Also there are some lines of dialog between father and son that are beyond cringe worthy and they lend themselves to a great game: close your eyes, forget what movie you are watching, listen to the dialog and try not to think of Brokeback Mountain.

The final round
So bottom line – I found more to like about Real Steel than to hate. The setting is interesting, the story about father and son works mostly and the robot effects are pretty well made. Also Dakota Goyo steals the show and is probably the reason the movie worked so well for me.
I want to watch the movie in English because I am sure he is even more charismatic but despite the German dub he was already a captivating person – now a lot of it has to do with the fact that the Jackman/Goyo relation is very rough at the beginning so the child can do and say things most child actors can’t because they have to be cute and cuddly. 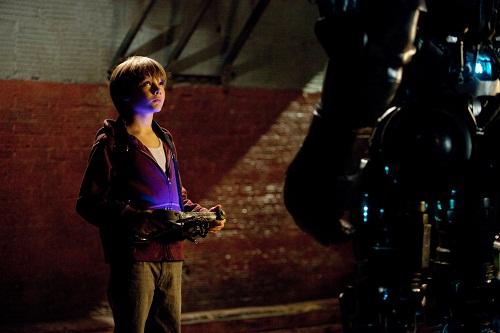 The idea of robots boxing as entertainment is of course a very cool sci fi concept, so for all sci fi geeks Real Steel is definitely worth a look. For everyone else it is a nice albeit schmaltzy sports movie that can deliver if you give it a chance and are not too annoyed by the forced love story.