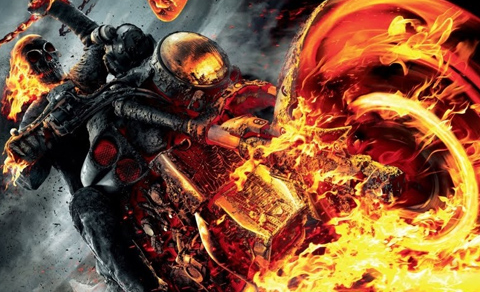 The Ghost Rider is back! After having sold his soul to the Devil Johnny Blaze (Nicolas Cage) is back to punish the sinners – but this time he goes after everyone, even the people looking at the THREEE DEEE skull in the theater. After all the Ghost Rider is now punishing speeding tickets and illegal movie downloads!

Sometimes going into the movies is more about the experience than the movie itself. Sometimes the worst movie can become a treat because you are laughing together with a friend and one or two laughs are enough to connect and pass two hours that would probably have been unbearable.

Ghost Rider: Spirit of Vengeance is exactly this category – which I often refer to as Speed Racer Category: an idiotic film that somehow entertains.

Make no mistake:
At this point of Nicolas Cage’s career you don’t expect a good movie when going into the sequel of the already critically panned Ghost Rider. Directed by Mark Neveldine and Brian Taylor (the guys responsible for the Crank series) this movie made me a bit sad.

As I immensely enjoyed the second crank movie due to its over the top nature I wished that Ghost Rider 2 would go this route as well. This was amplified by the fact that there are some truly hilarious scenes especially when Nicolas cage loses it it felt like Crank 2.5 and I was left wishing for more of this: 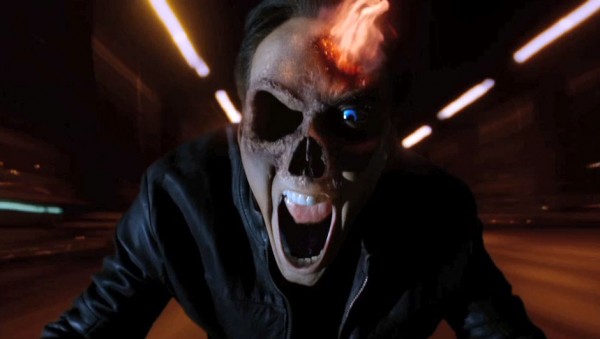 Sadly between the hilarious bits about what body part of Ghost Rider equals a flamethrower (you won’t forget this scene) there is dull exposition and over seriousness which is very very sad. The creative restraints are felt everywhere. Much like Edward in Twilight Nic Cage tells the characters how dangerous he is and how it is not safe to be around him but it is never any problem if you are a protagonist.

I am by no means a gorehound but this movie should have been a Rated R horror film. Ghost Rider is a guy who is punishing people so said punishment should hurt. Instead we are treated to the “PG-13 it is ok to kill people as long as there is no blood”-death which Michael Bay perfected and which irritates me even more than any Saw movie.

So with two or three hilarious scenes Ghost Rider: Spirit of Vengeance is by no means anything you should or need to see but if you rent it for a drunk dvd-nighter here are the rules:

Take a shot and praise Nolan when…
…a bad line of dialog reminds you that the guy who wrote this (and directed Blade Trinity) wrote Batman Begins and co-wrote The Dark Knight and The Dark Knight Rises.

P.S.: Take a look at that hilarious article about Nicolas Cage firing a sixth-grader who was responsible for picking his roles