Note: this is a guest review from a friend of mine who has had the chance to catch a screening of Ridley Scott’s Prometheus over at the Netherlands (sadly Austrian moviegoers have to wait until 9th of August)

The plot (which is pretty much given away in the trailers) is about a group of “scientists” who travel to a distant planet pointed out by various extinct cultures all over the world – whether or not their knowledge of astronomy was sufficient for a prediction like this remains a mystery.

Wealthy old industrialist Peter Weyland (Guy Pearce) sponsors a trip to this planet for our main actors – hoping to find the answer for the origin of mankind.

The characters are kept simple and lack a certain depth which makes it hard to relate to them. Especially because there is next to no character development with the exception of leading actress Noomi Rapace (original Girl with the Dragon Tattoo).

Initially her character profile is non-existent but she gets more badass and relatable the more the movie progresses.

However every minute she was on screen I inevitably compared her to Sigourney Weaver – and she definitely looses this battle. It might seem unfair to compare these two but with the whole setup I just couldn’t help myself.

The outstanding performance is Michael Fassbender as the mandatory android who conveyed more emotions by not showing any at all (Hello to Ryan Gosling). I felt bad over the course of the movie because he is the driving force behind most of the story elements but never gets any credit, gets constantly mocked and is treated like a screwdriver by the other members. 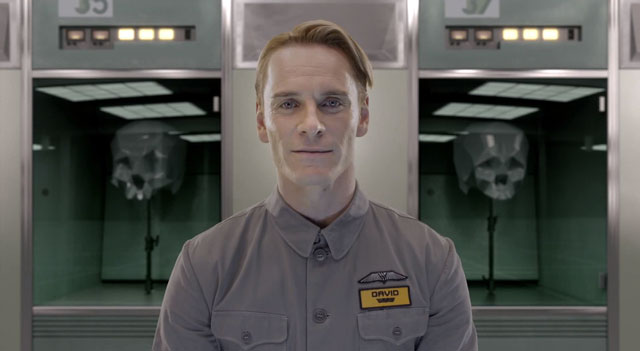 The only other notables characters were:

In space no one can hear science

What’s the worst thing that could happen on a strange planet – especially when it looks like all its inhabitants have died out?

If these so called scientists act like a bunch of middle-school students I think it is really hard to relate to any of them – let alone care about them if they are in danger.

The actions scenes are rather minimalistic, and except for the one scene in the loading bay of the spaceship (you will know which one) they are all very quick and realistic which was one of the stronger parts of the movie.

The visual effects are eye-catching in some of the scenes but grounding the design in the Alien-universe has led some artists to overuse of the color gray.

The story twists are all foreshadowed heavily and never take you by surprise – which kind of taints the main story. At one point I simply didn’t care about it anymore mostly because of some unnecessary or generic scenes.

Some of those uninspired scenes are so conventional they run close to being unintentionally funny. My favorite one would be this dialog (loosely quoted from memory):

Interior, bed of Rapace and her husband (Marshall-Green)
when they discuss their first trip to the strange alien chambers.

Marshall-Green: So everybody with half a brain
and some DNA can create life.

Which leads to a scene establishing that Rapace can’t get children.
The symbolism to birth is something very common in the Alien stories but here it is just thrown in to have a birth-allegory. It is taken out of context has never been foreshadowed nor has it any bearing on the plot which made it very amusing because Rapace makes a very big deal out of it – only to never mention it again.

In the end Prometheus turned out to be the movie I expected it to be: a nice science-fiction movie – with some really weak story parts – neither really able to leave the shadow of the old Alien franchise nor establishing anything new or interesting.

Expect for some fanservice and the obvious design similarities the connection is very loose and you should best not start comparing it to the old movies.

But for a summer blockbuster it was entertaining and I didn’t regret the money spent.