Wreck-it Ralph is the story of what happens in an arcade once it closes for the night. All the characters from different games meet up, have a chat or – in the case of Ralph – ponder about their “job”. You see Wreck-it Ralph has to play the villain in the game “Fix-it Felix jr.” and he is pretty depressed: because a bad guy cannot be a hero… can he?

Produced by Disney Animation Studios Wreck-it Ralph wows with a detailed world and playful animation. Contrary to many animation movies the movie does not strive for photo-realistic graphics. Instead the design embraces everything that people criticize about digital animation namely the overly plastic textures which feel perfectly natural in this digital world.

The world is an arcade!
But the movie is not all style and no substance: the world is so full and stories lurk around every corner. It is pretty much a Tron: Legacy with a working story showing us a world beyond what we know in the veins of movies like Toy Story.

The movie explores the world of 8-bit games, a super-cute version Mario Kart as well as modern ego-shooters. There are a lot of gags for gamers and interestingly enough the modern day game references are not as frequent as the arcade-gags making the target audience for those gags probably 30+. 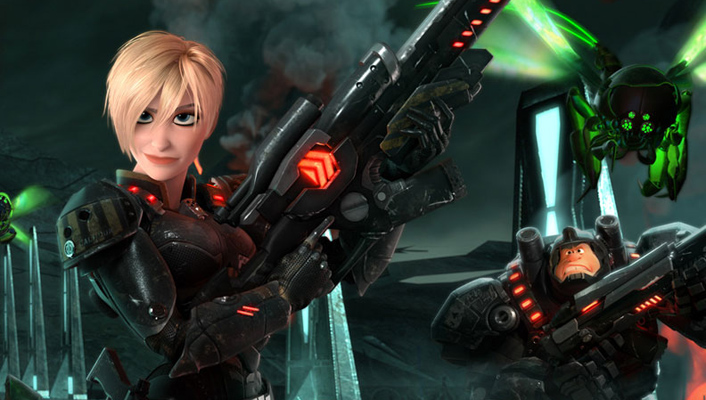 There are some pacing issues I had with the movie as it dragged along in the middle a bit as well as with the female-commander-character from a first person shooter. She is a typical “badass female character” and the gag is funny the first few minutes but gets drawn out. A lot of the gags are funny the first time but get repeated over the course of the film. One can always justify the caricatures and flaws of the movies by saying “it’s like that in computer games as well” but for me that excuse didn’t work in some cases. Just because the script references a character as being annoying doesn’t mean that it makes the character less annoying.

Another thing that bugged me was the overuse of product placement which started to rival I, Robot. Now let’s be clear – in a movie about computer games there is bound to be advertisement be it in the form of Sonic, Bowser or the name Hero’s Duty which is oddly familiar to available shooters. But all this is subtle compared to the lazy product placements in the super-sweet world of Sugar Rush (a super candy toy racing game).

Isn’t being a villain just atnother job?
But at the core of Wreck-it Ralph is a well thought out story with a conclusion that feels organic and logical. The message of the movie is clear after about 10 minutes but it still is a fun watch. The message is one we have heard a lot of times about self-appreciation and –respect.

The only downside I had was how the finale was handled. There is a point when the story is logically resolved and there are just a few more obstacles, when the villain gets superpowered for no reason and attacks even though his arc was already completed. Once again you can justify this by saying “it’s like the games” but I already hate those things when they happen in games (Arkham Asylum) so seeing them on screen makes me hate those things double.

But despite some issues Wreck-it Ralph has good intentions, an interesting world I would love to re-explore (which I might given that the sequel is already in the works), relatable characters and a solid story.

SPOILER: Gaming nitpick
This is a spoiler for the film so don’t read it if you haven’t watched it:

The glitch of the character Vanellope was something that made me smile. The glitch in her program is eventually what gamers love about her and it is obvious that the glitch is an analogy to teach children that there are people who are different but that you should respect them and not make fun of them – which is a very nice idea indeed.

Still knowing a bit about gamers and their raging complaints (seriously they can be worse than movie fans) I couldn’t help but smile when I was thinking of how Vanellope’s glitch would have worked out in the real gaming community. Because I think King Candy would have been right in that the glitch would have been seen as a problem with the game. Just look up ranting gamers who declare a game to be the “WORST GAME EVARRR!!1!!1!” just because of a minor bug and imagine them hating on Vanellope. I would have loved if that idea would have been the central idea and was a bit let down when the villain was revealed and it was more about killing the villain so that everything is great again.