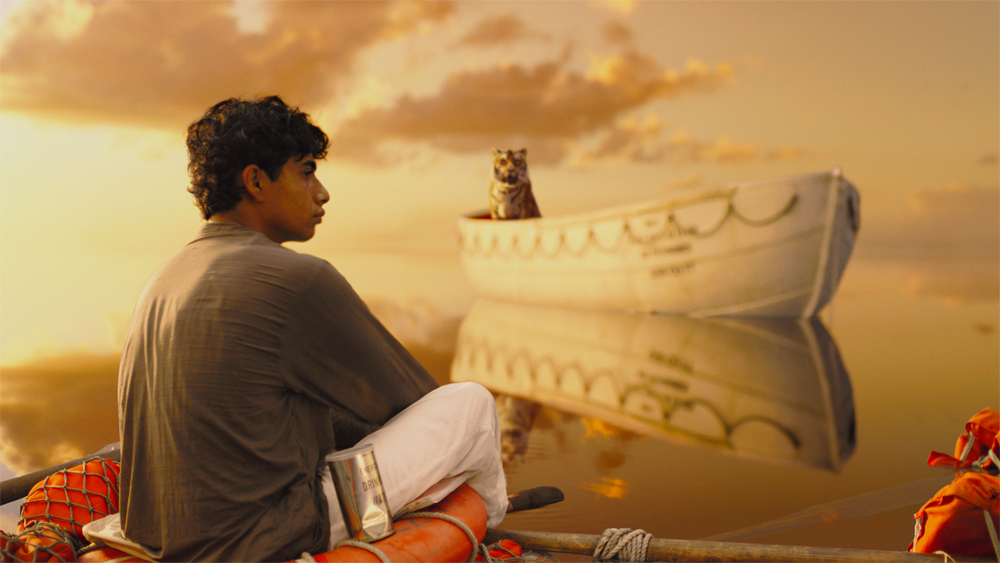 Life of Pi is an adaption of the book of the same name by Yann Martel. The movie is about Piscine „Pi“ Patel (Suraj Sharma) whose father owns a zoo in India. When the family decides to sell the animals oversea they all board a ship transporting them and the animals. Unfortunately a storm causes a shipwreck and kills everyone of Pi’s family. He is now alone in a lifeboat… well not alone.

Next to a few other animals there is a big tiger – named Richard Parker – in the lifeboat and Pi has to learn to not only find food but to somehow survive while a tiger wants to kill him.

Man vs Nature/Man and Nature?
The central story of Life of Pi is a great showcase of visual effects driven storytelling. Richard Parker is beautifully animated and the power-struggle between man and animal is thoroughly engaging. Add to that the visual vignette of director Ang Lee and this story is a marvelous thing to look at. From time to time the ocean is rendered in a beautiful majesty – at other times the ocean is a terrible force to fear. The same goes for Richard Parker. Ang Lee explores both the beauty as well as the danger of nature.

If it were only the story of Richard Parker and Pi in a life-boat I would have thoroughly loved Life of Pi but unfortunately the movie comes packed inside a spiritual selfhelp guide. The opening 30 minutes consist of anecdotes about French swimming pools, shots of various religions and animals. A great deal is made about how Pi is Christian, Hindu and Moslem at the same time because all religions lead to god – but this mélange of religions never escapes the feel of a tourist guide for shallow religions. It says as much about the nature of the three religions as the words Eiffel Tower, Coliseum and Big Ben say about the history between those three countries.

And I am aware that those things are all present in the book but just as a story experience in a pretty long movie they added little more than small details about Pi that weren’t necessary for the central story and just windowdressing for more spiritual stuff to throw at the audience.

You can choose not to believe in god – then your life is boring
It boils down to a generalized “all religions are the same” without ever exploring the why. And frankly I did not understand why this had to be in the movie. To me the spiritual journey and the nature of god (if there is such a thing) is something that is incredibly tough to discuss and showcase and with Life of Pi I could not get over the lecturing tone of the elder Pi (Irrfan Khan) telling his life-story and assuring us that afterwards we would believe in god.

When the movie directly addresses spiritualism it gets extremely pretentious and lecturing and it made me sad because the movie didn’t need this. The story of Pi and Richard Parker is already layered with questions about spirituality:

Does Richard Parker have a soul?
Or are animals just animals and we project a personality onto them?
Would Pi have survived without Richard Parker?
What is the meaning of survival?

All those things are fantastic fruits for discussion and it doesn’t matter if you interpret them as spiritual messages or just a simple tale of man and tiger.

The subject of god is a subject we have been smashing our heads in for the past millennia so it is clear that no one has a definitive answer and for Life of Pi to be so sure of itself only to at the end come up with a typical twist of interpretations is no affirmation of god – it is much more a killer for conversation because the great thing is the interpretation of the story and there are so many layers to Life of Pi it seems like a discussion killer to represent a definitive interpretation at the end.