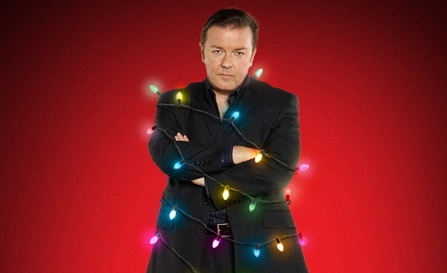 Ricky Gervais is a man of many talents. A great comedian, a big thinker, a charismatic actor and also a fantastic mind behind TV-programs (The Office). In the 12-part TV-series Extras he once again defied expectations when he started with a simple premise: it is about a man who is an extra on movie sets and each episode features a different movie star – but by the end of the series Extras would have turned 180°.

Instead of relying on the premise of having a new set and star with each episode the series was not just a great laugh it was also a fantastic story about the growth of a character. The first hint was a change of dynamic from season 1 to season 2 when Gervais left the established setting and had his character have a breakthrough with his own show.

Instead of repeating the fun formula of season 1 season 2 had a much darker tone. It dealt with a man losing a dream, an idealist who sees his creation destroyed and turned into a distasteful mainstream fare. Season 2 was much bleaker and less funnier but all the more emotional at the end.

This was especially the case with the final episode/christmas special when the protagonist of a comedy series had finished his character arc and what had started as funny satire turned into  a reflection and critisim of many things that are wrong with our current celebrity cult. Poignant and provocative the finale of Extras, especially Gervais’s confession and apology elevate this series to something unique and incredible.