…
…
… am I even allowed to complain about this movie?

Is it even a surprise if I say that this Ice Age is a tired unwitty industry cash-grab?

Well contrary to reason I sat through the fourth installment of the Ice Age series. I have never seen the second part (which apparently blows) and found the third part to be moderately enjoyable. So I had moderate expectations which this film didn’t meet.

To my defense
I have watched Ice Age because of one man: Otto Waalkes 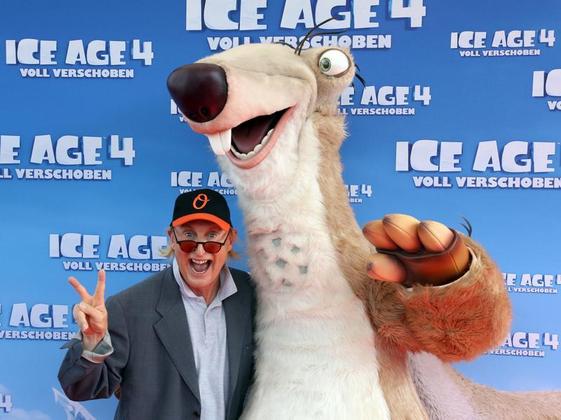 He is one of my favorite comedians and has voiced Sid the sloth in each installment. His voicework is hilarious and one of the biggest selling points for german speaking countries. Of course Otto – age 64 – is long past his prime but the inner fanboy of me compells me to watch as many of his outings as I can get my hands on.

But I am not the only one falling for the Otto-trap. Ice Age 4 had its best foreign debut in Germany and Otto’s antics were so popular they influenced John Leguizamo’s portrayal of Sid.

But not even Otto can save this…
After a moderately entertaining opening with Scrat the squirrel – featuring some rewriting of history that would make Tarantino proud – the protagonists have to face the continents drifting apart and with it some mandatory “adventures”.

Overstuffed with already way too many characters Ice Age 4 – Continental Drift crams in a subplot about Peaches (the daughter of Mammoth Manny born in part 3) and a clique of highschool Mammoths… it is as bad as it sounds.

Between this the movie throws in a mandatory obstacle for Manny, Sid and Diego which doesn’t really feel exciting or at least crazy like the dinosaur world from part 3 – and conflicts like the central story of part 1 are as far away from this franchise as Europe is to America.

Aside from this the movie is semi-passable for children but boring and tedious for the rest. The new characters are there to be new and over the top. Villains look disgusting and have bad dental hygiene unless they are set up to become love interests and so on and so forth.

There is nothing new here and what you already know is only bottom level of passable.