The Hobbit: An Unexpected Journey

Is „very good“ good enough for The Hobbit: An Unexpected Journey?

This was the question of a review over at hitfix and it is an incredibly accurate description of the dilemma that Peter Jackson’s return to Middle-Earth has to face.

Set 60 years before the Lord of the Rings trilogy this first installment of the Hobbit-Trilogy tells the story of how Bilbo Baggins (a wonderful Martin Freeman) went from being a respected to an adventurous Hobbit who would join Thorin Oakenshield (Richard Armitage) and his 12 fellow dwarves. Together with the ever mysterious and grumpy wizard Gandalf (Ian McKellen) their mission is to get to the lonely mountain Erebor to kill the Dragon Smaug and reclaim the mountain which used to be the home of Thorin’s race.

Much like Tolkien who wrote the Hobbit as a story to tell his children we start with the old Bilbo (Ian Holm) from the original Lord of the Rings trilogy trying to write down his adventures for his nephew Frodo (a cameo by Elijah Wood). And very similar to the groundbreaking trilogy we start with an epic flashback of how the dwarves were forced to flee their home due to the dragon’s attack. And right from this moment we are back in the Middle-Earth we know and love.

It is only after this that the movie introduces the younger Bilbo and how he got into this story of dwarves, trolls, wizards, mountain giants, goblins and so much more.

With 13 dwarves, Bilbo and a wizard this film has an unusually large cast and where one was able to distinguish the characters in the first Lord of the Rings based on their race this is something you don’t have with 13 dwarves.

But just visually each dwarf is unique and compared to the book the dwarves have surprising depth (at least 3 of them in this movie and probably more to come). Especially Thorin was shaped into a much bigger and layered character and this will undoubtably pay off in the later movies (yes there are more to come).

The argument that gets tossed around a lot is that 3 movies seems a bit much for such a short book but personally I have no problem with it. With many franchises this splitting is many times done completely unjustified but with this movie I had no gripes with it. Sure one can argue that some trimming here and there might have helped the movie but what I loved about this first installment in the new “Hobbit-trilogy” is that it has a clear ending point.

This was something that I felt a bit missing in Fellowship of the Ring. It ended with more of a cliffhanger whereas An Unexpected Journey had an absolutely satisfying ending. The story really had a nice arc and at the end of the movie I had this feeling “well first step done, can’t wait for the next one but right now I am happy that this step is done”. 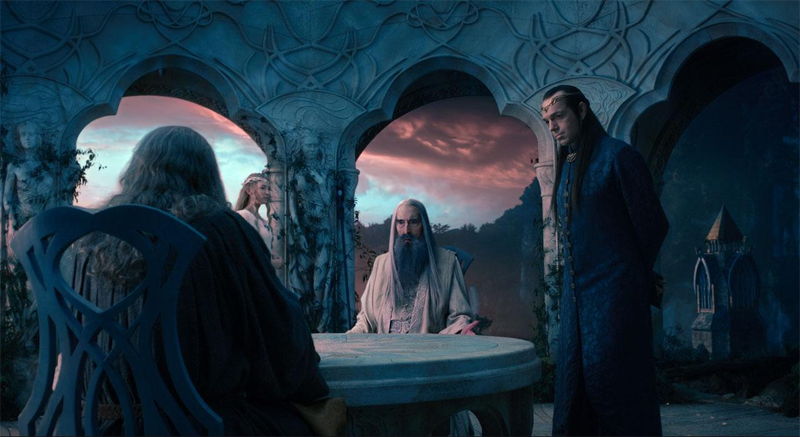 There was a lot of critical flack for the movie – much harsher than I expected for this movie and every time I checked the newest reviews my hopes sunk even more. Yet I couldn’t help but enjoy almost everything in this movie. There are some pacing issues, a few minor sentences, a strange council meeting and one action sequence that is much to long but other than that I was thrilled to be back in Middle-Earth.

I can understand people’s reservation about the movie but for me it is important that the movie has its heart at the right place. There are 3-4 fantastic and emotional scenes where the Tolkien optimism starts to shine through and the Gollum scene near the end is the standout.

The Hobbit: An Unexpected Journey is a welcome return into a fantastic magical world, lovingly crafted and despite some shortcomings stands high above soulless manipulative cashgrabs.